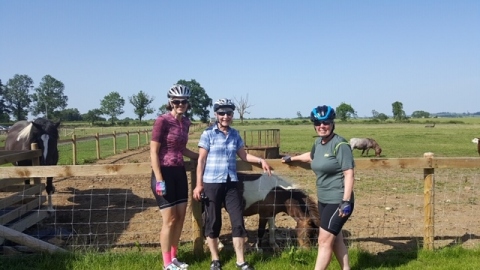 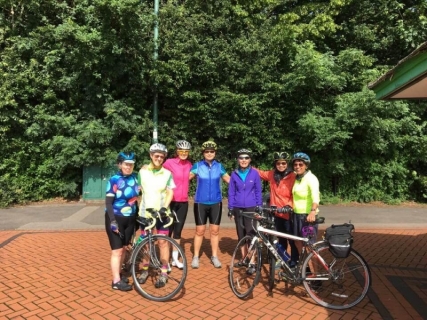 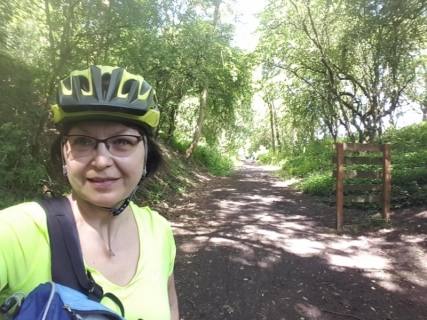 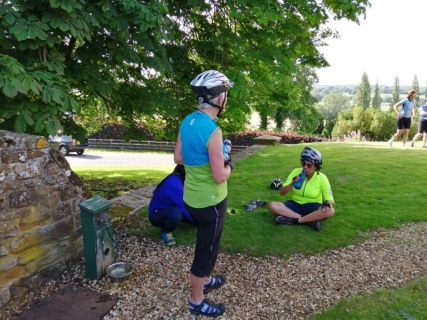 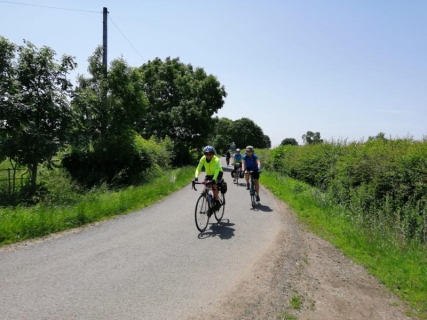 . “Why don’t you organise a Ladies Tour?” piped up Norihan, after our Ladies Ride  to celebrate Womens Cycling Festival in July 2018.
And So the seeds were set… Seven of us set off from the War Memorial Park on Friday June 28th. Little did we know this would be the hottest few days of the year so far.

The group was made up of one or two experienced riders and some completely new to riding beyond one day or touring with panniers all the way. Most of us had met in the Sunday morning rides over the last year or two.

We headed for Northampton first stopping in at Hilltop Hunningham and then riding over the flat lands of east Warwickshire and the rocky trail past Wolfhamcote church to Braunston. A puncture before we got to Stoneleigh was promptly repaired and our confidence grew that we could manage almost anything ahead of us. We were looking forward to new experiences, good company historic places, countryside and nice cakes at the tea stops we were nicely settled by lunchtime with lunch by the canal in hot sunshine. Idyllic!
The hills beyond Braunston gave us the first test of legs and the eventual shade of trees outside Great Brington church was most welcome. Unfortunately the amount of talking on our stops meant we were too late for our tea stop and we headed straight into Northampton on the old Roman road though a place called Nobottle. As we entered the town, we encountered hoards of people walking in the opposite direction. Eventually we were informed: Madness were playing at the rugby stadium that evening. This meant that the town centre was fairly quiet when we went out for our meal later on, though some interesting sounds were heard later that night as we settled in at our Travelodge.  (BTW -ladies evening meals – cautious eating, reserved alcohol consumption, lots of talking)

Saturday morning dawned and we had breakfast at Jenny’s Café in Gold Street, and set off via the safe option of NCR 64 through the suburbs of Northampton on to the Brompton Valley way. This provided welcome shade as the morning heated up, but the bumpy surface and long tunnels frustrated our overall speed and the Garmins and Google maps kept losing connection, to the extent that we missed our pit stop at Pitsford reservoir. Out came the maps that Jill had so cunningly prepared and thoughtful purchases of fruit and sweets and ample water on board, meant we could soldier on for 17 miles until we emerged from the shade and walked into the blistering heat of Waterloo Farm, a mile outside Market Harborough.  This had been recommended by a rider on our Trivets, visiting from Kettering. Great tip Geoff! Welcome water, coffee and early lunch sitting by the side of a fishing lake we were refreshed and ready for the road.
Heading north, sun on our backs, we stopped for a tyre check in Market Harborough and took a quiet route out through Great Bowden. We discovered that Leicestershire drivers like speed and even though traffic was not excessive it wasn’t without hazard. As the heat continued to build beyond 30C our search for the tea stop intensified. It was across the A47 rather than Billesdon itself , but Buttercup Farm exceeded our expectations: ponies, lamas and a large airy barn containing  a cafe with gorgeous Lemonade,  tea and cakes.
Undulating hills extended towards Melton Mowbray with a couple of challenging ones really testing our endurance. Stopping too frequently we lost our rhythm, but dehydration was a risk we had to deal with. The B&Bs at Melton were a well-earned delight: great hospitality and good breakfasts were a real contrast to our previous night. During the evening we made it to the Anne of Cleves, a pub with great history, but a poor quality of service. Hey ho!

Sunday morning, we were 5 riders, one had returned home as planned, another thwarted by hay fever. We set off towards Syston along the Tweake Valley, through some picturesque villages. Picking our way around the edges of Leicester City were a challenge that lost us time and we arrived for lunch at Countesthorpe quite late.  With the day protracted and a rider falling in Wigston (heavy traffic pushed us on the footpaths), two ladies decided to leave the ride at at Ullesthorpe. We had ridden 34 miles with a significant head wind and tiredness set in. The three remaining arrived in Coventry around 8pm

The tour taught us all such a lot about ourselves: our fitness and how we worked as a team. We have already talked about our next tour and the skills we want to develop: fitness, strength, use of garmin and maps, history research and bike mechanics. We all felt a great sense of achievement and enjoyment, roll on the next tour!